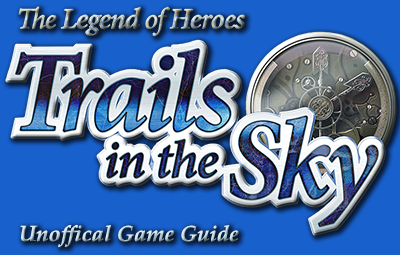 While some quests are simple linear tasks that don't require much help to complete, other's aren't so friendly. Here you will find a walkthrough for every job and quest that you can complete in Trails in the Sky.

The Prologue quests follow Estelle and Joshua's beginning adventure as they prove that they are worthy of the title "Bracer." Although, as they progress through their training and quests left from their father, they stumble across a nefarious plot to steal something extremely valuable.

The first chapter brings the young bracers chasing after clues of their missing father in Bose, where they encounter the same criminal organization from Rolent. What are the Sky Bandits doing in Bose, and why are they going after the air ships?

Chapter two sends Estelle and Joshua to the Ruan province, where a secret plot is unfolding by an influential leader. How many people will be affected by their evil plans, and what does the Jenis Royal Academy's festival have to do with it?

Chapter three introduces Estelle and Joshua to the Zeiss province, where the examination of the Black Orbment leads to a deeper secret.

The Final Chapter brings Estelle and Joshua to the Grancel province to meet the queen and partake in the celebration. Although, a darker plot looms over the happiness.

To Queen Alicia Hostage Liberation To Rescue a Queen Aureole